"From script to screen"


Exploring further my knowledge of animation I came across a book called "Animation-from script to screen" Shamus Culhane. 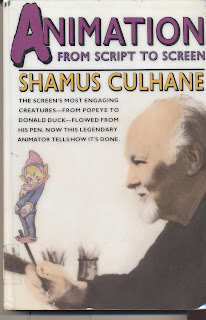 This is an interesting position for the majority of people that start their adventure with animation, but anyone can read it.
There are lots of tips on where to begin their work on the film, what to do during your project, for example, carry a small notebook to write everything that you can think of. Sometimes in the past while I was walkking on a street or sitting in a bus, I came up with an idea and later at my home I could not recall it .
One of the more interesting quotes is "animation has a definite limitation in its exploatation of animals and human beings". He was writing about gags that in real life they can be funny but in a film- not.