So we have an idea for our animation, we will start by making some sketches.
Firstly characters: how they will look, what they will be wearing and later how they will  move. It is hard to imagine movement before we have established the personality and apperance of the characters.

So first rough sketches and next we develope our characters and finally we know how our character/s look like. 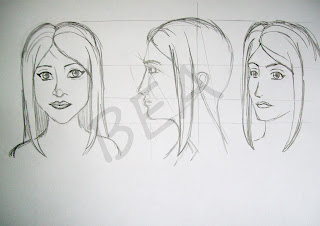 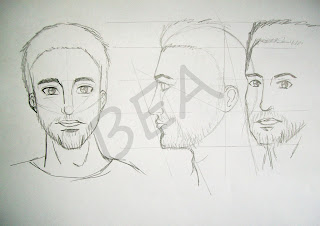 This is my characters for animation.

Later we create character sheets. Can be in color or black and white. It is better when we see character, at least, in 3 viewa. Ofcourse can be more. Every time proportion of the body need to be the same. 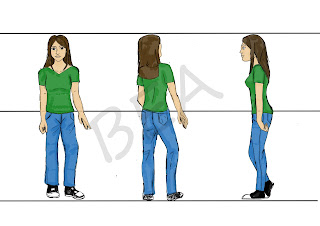 On this site there are lots of character sheets and it is good to see how professional artist make them. I also reccommend the book "The Art of Hercules: The chaos of creation" S.Rebello and J.Healey. There are pictures of characters how they looked at the beginning and how they developed them.


Some time when we search for something on internet we can find some unexpected stuff which can be very inspired for us.
Once I discovered Anton Pearsons portfolio. He is a designer and somebody could say what animation has to graphic design? Who knows. I really like how he mixes colors. It is really amazing I can stare at those pictures and analyse them all the time. 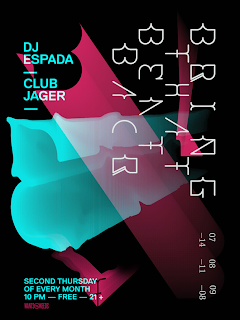 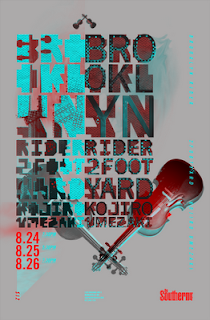 Anton Pearson
Posted by Bea at 3:54 PM No comments:


Why do we need storyboard?

In the past I thought that I don't need to draw what I want to animate because everything is in my head... it is not true. We should make sketches of everything that come up in our head. With storyboard we can organise better our work and will show the key frames of our film. Storyboards are used for animation movies and also for live action films.

We need storyboard to compose frames, how they will look like, what will be on scene, who will appear... We have to decide which type of frame we will use and there we have:
a master shot which show us all the place and characters where the action will occur,
a full shot which show all the character,
a medium shot which show from characters hips upwards,
a medium close-up which show character face includes shoulders,
a close-up which zoom on characters face.
With storyboard we show other people of our staff camera movements, it angles, zoom in or out. The storyboard should be readable for everybody (of course everybody should use a little bit of imagination...). It doesn't matter what is the style because every artist is individual so don't worry about it, it is necessery to have drawing skills and before making storyboard, know basics about perspective and human or animal anatomy. I discovered that take photos or film is a really good way to have references.

We should decide the frame size and later start with roughy, sketchy storyboard and letter make clean up, draw bigger frames with more details. I also reccommend have a break for few days and put sheets of our work on a wall or on a floor and see it one more time. Sometimes we can notice that same frames are missing, that some action is going to fast or to slow. 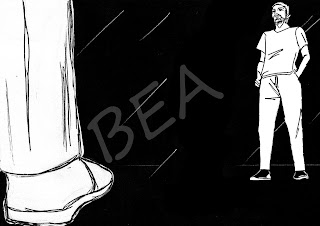 This is one frame from my final storyboard